How do ranked ballots work?

Ranked choice voting gives you the power to rank candidates from your favorite to your least favorite. On Election Night, all the ballots are counted for voters’ first choices. If one candidate receives an outright majority, he or she wins. If no candidate receives a majority, the candidate with the fewest first choices is eliminated and voters who liked that candidate the best have their ballots instantly counted for their second choice. This process repeats and last-place candidates lose until one candidate reaches a majority and wins. Your vote counts for your second choice only if your first choice has been eliminated.

Here is a one minute explanation from the City of Kingston:

What are the benefits of ranked ballots?

Under our current system, it is possible for a candidate to win an election with only 20% of the votes.  All across Ontario, each municipal election sends Councillors to office even when most of their constituents wanted someone else to win.  Ranked ballot voting ensures that every successful candidate elected has the majority support of the voters.

Under our current system, candidates often attack each other, throwing insults and accusations in an effort to discredit their opponents.  This puts the focus on voting against a set of ideals rather than discussing what each candidate would do if elected. With ranked ballot voting these tactics work against you.  To win, you have to appeal to a larger audience - including your opponents' supporters - in the hope that they might rank you second or third.  This means more positive debates and more respectful and meaningful discussions.

Under our current system, people spend more time talking about potential vote splitting than they do talking about the issues.  Headlines are dominated by stories about who is dropping out or who is stealing votes from another candidate.  With ranked ballot voting there is no such thing as vote splitting.

Under our current system, candidates are often forced to drop out of the race to avoid vote-splitting.  Some of this happens in a very public manner.  However, most of it happens months before the election as potential candidates are discouraged from entering the race.  This frequently happens at the local level with new, eager candidates being asked not to run by their own colleagues.  This is the exact opposite experience that we want candidates to have.  With Ranked Ballot Voting, new voices would be welcomed and encouraged.  This would lead to more choice, more voices, more engagement, and more diversity of ideas.

Reduces the Need for Strategic Voting

Under our current system, voters are often told to vote "strategically".  With ranked ballot voting, you can always vote with your heart - not your calculator.  You don't have to vote against something, you get to vote for something.

What was the ranked ballot referendum of 2018?

2018 was the first election in which Ontario municipalities were permitted to use ranked ballot voting (thanks to the Municipal Elections Modernization Act, 2016).

London, Ontario used ranked ballot voting in the 2018 election. They did not have a referendum, their council decided the benefits of ranked ballots were worth implementing right away.

Kingston and Cambridge, Ontario decided to put this decision in the hands of the people and held referendums to see if they should move to this voting system for the 2022 elections. On October 22, 2018, 63% of Kingstonians cast their vote YES in favour of a Ranked Ballot. In Cambridge, the result was 56%. Together, our cities have become the first in Ontario where the people chose to use a ranked ballot through a city-wide referendum.

On December 18th, 2018, Kingston city council voted overwhelmingly to respect the results of the referendum and initiate the process to implement ranked ballots for the 2022 election.

A number of other American cities have adopted or voted in favour of ranked ballot elections, which are now awaiting implementation.

In Britain all British mayors are elected with ranked ballots.

Canadian political parties have always used some form of runoff system to choose their leaders and to nominate the local candidates.  Recently, all of Canada's parties have decided to use ranked ballots to choose their leaders.  This change was made to boost internal democracy within the parties, allowing all members to vote - not just those who attend the convention.

The National Hockey League uses a ranked ballot to choose its Hart, Norris, Calder, Lady Byng, Selke, Vezina, and Jack Adams award winners every year - with points awarded based on where each player has been ranked.  The National Basketball Association uses the same system to choose its top player awards as well.

In 2010, the Academy Awards adopted ranked ballots to choose Best Picture.  This was done to avoid a situation where a movie could "win" with only 20% support in the Academy.

Does the use of ranked ballot voting improve voter turnout?

For more information, see Drew Penrose, The Facts of Ranked Choice Voting: Voters Like It, High Turnouts are Trending (12 June 2008).

A study of the 2005 San Francisco city-wide election found that ranked ballot voting “increased voter turnout citywide by 2.7 times, and in the city’s most racially and socio-economically diverse neighborhoods turnout quadrupled.”

In the experience of many cities, ranked ballot voting has reduced negative campaigning.

Is using a ranked ballot complicated?

Using a ranked ballot is not complicated.

Instead of checking off one choice, voters will rank from their favourite to their least favourite.  We do this all the time: chocolate is my favourite ice cream, strawberry is my second favourite, and vanilla is my least favourite. This is the same, just with candidates for city council.

Cities that have used ranked ballots have found that people do not find using them complicated:

A 2009 study by St. Cloud State University found that 95% of Minneapolis voters felt ranked ballot voting was easy to use.

An exit poll conducted when Santa Fe, New Mexico first implemented ranked ballot voting found that 94% were satisfied with their voting experience, and 70% were very confident their ballot counted as intended (compare this to only 55% of New Mexico voters feeling that their vote would count as intended for the 2016 presidential election).

A study of two San Francisco ranked ballot elections found that “Voters of all races and ethnicities find [ranked ballot voting] easy to use.” This was based on exit polls conducted by the Public Research Institute at San Francisco State University, the Asian Law Caucus, and further analysis of ballots by Fair Vote.

The City of London, which used ranked ballots in the 2018 election, created this mock-up of the ballot to help explain the process to voters: 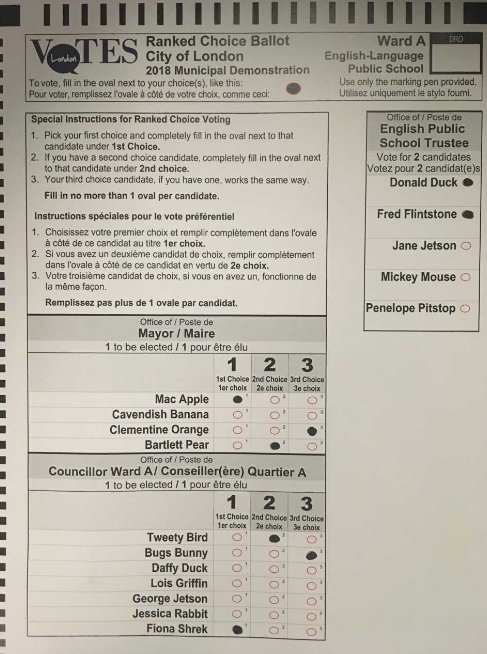 That seems rather specific to be a frequently asked question. But yes, Jennifer Lawrence supports ranked ballot voting.