October 22 was a historic day for the people of Kingston.

63% of Kingstonians cast their vote YES in favour of a Ranked Ballot when they head back to the polls in four years. Our city has become the first in Ontario where the people chose to use a ranked ballot through a city-wide referendum.

Then on December 18th, 2018, Kingston city council voted overwhelmingly to respect the results of the referendum and initiate the process to implement ranked ballots for the 2022 election.

None of this would have happened without your help with the YES campaign!

Now, at the halfway point between the referendum and the upcoming election, we need to remind council of implementing this important initiative that the people of Kingston voted for.

The deadline for Council to pass the by-law to implement ranked ballots for the 2022 election is coming up: May 1, 2021. But the decision-making process and public consultation can take at least four months. So Council is starting to run out of time.

It’s understandable that the pandemic has forced some municipal initiatives to slow down, but we can’t let our historic YES victory slip away.

The people of Kingston expect City Council to follow through with their promise and complete the process of passing legislation adopting Ranked Ballots for the 2022 election.

They expect this because they engaged in a vigorous referendum campaign informed up by a City-run awareness effort and grassroots advocacy that demonstrated the democratic spirit of Kingston. Both advocates and detractors of this choice have had a chance to make their voices heard. Electors made their decision to move to a ranked ballot informed by Mayor Paterson’s promise to abide by the results of their choice, and we could not agree more with his public statements that the results of the referendum “would be binding in a political sense” (CBC News Sept 3/18). At the end of this democratic process, the people’s choice has been made clear, and a clear majority wants Ranked Ballots.

E-mail your city councillor and the mayor today to remind them that democratic renewal remains a priority for the people of Kingston. Ask them to ensure the city will be positioned to implement the ranked ballot by-law by May 1, and put Kingston in the history books.

Thank you for your support. 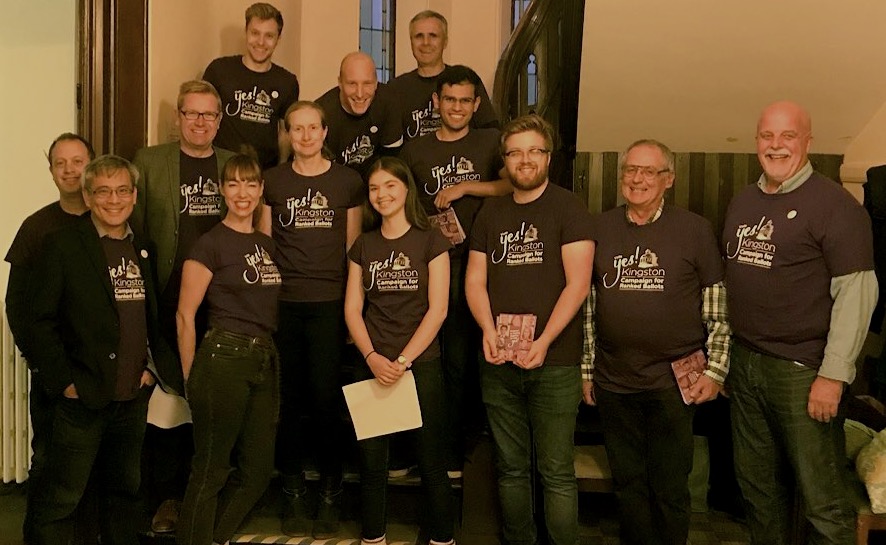 The YES Kingston Team at The Spire for our info session and Sarah Harmer Concert.